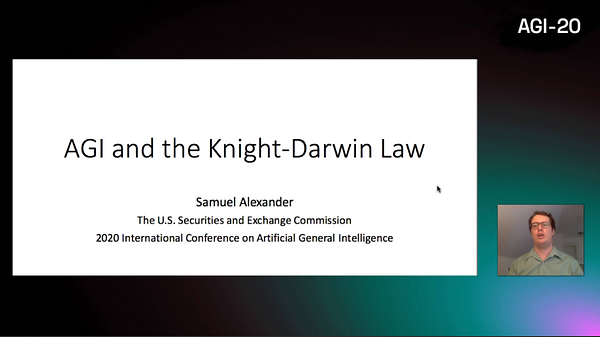 AGI and the Knight-Darwin Law

Can an AGI create a more intelligent AGI? Under idealized assumptions, for a certain theoretical type of intelligence, our answer is: “Not without outside help”. This is a presentation on the mathematical structure of AGI populations when parent AGIs create child AGIs. We argue that such populations satisfy a certain biological law. Motivated by observations of sexual reproduction in seemingly-asexual species, the Knight-Darwin Law states that it is impossible for one organism to asexually produce another, which asexually produces another, and so on forever: that any sequence of organisms (each one a child of the previous) must contain occasional multi-parent organisms, or must terminate. By proving that a certain measure (arguably an intelligence measure) decreases when an idealized parent AGI single-handedly creates a child AGI, we argue that a similar Law holds for AGIs.