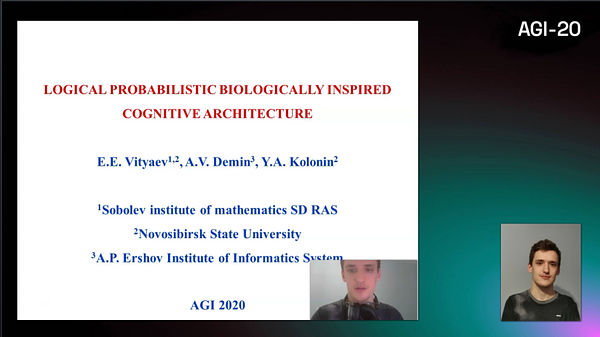 We consider a task-oriented approach to AGI, when any cognitive problem, perhaps superior to human ability, has sense given a criterion of its solution. In the frame of this approach, we consider the task of purposeful behavior in a complex probabilistic environment, where behavior is organized through self-learning. For that purpose, we suggest cognitive architecture that relies on the theory of functional systems. The architecture is based on the main notions of this theory: goal, result, anticipation of the result. The logical structure of this theory was analyzed and used for the control system of purposeful behavior development. This control system contains a hierarchy of functional systems that organizes purposeful behavior. The control system was used for modeling agents to solve the foraging task.

Panel discussion with authors of papers about 'Cognitive Architectures and Agents' at AGI-20 conference. Held live on Underline, 06/24/2020