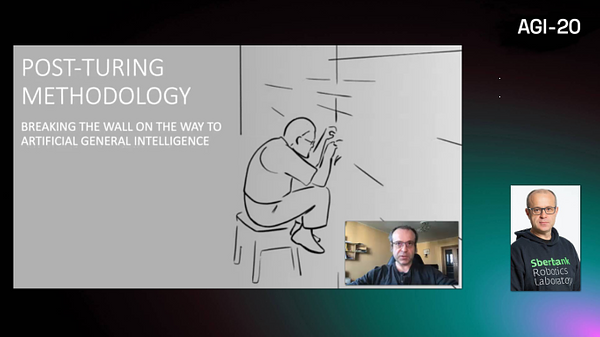 Post-Turing Methodology: Breaking the Wall on the Way to Artificial General Intelligence

This article offers comprehensive criticism of the Turing test and develops quality criteria for new artificial general intelligence (AGI) as-sessment tests. It is shown that the prerequisites A. Turing drew upon when reducing personality and human consciousness to “suitable branches of thought” reflected the engineering level of his time. In fact, the Turing “imi-tation game” employed only symbolic communication and ignored the physical world. This paper suggests that by restricting thinking ability to symbolic systems alone Turing unknowingly constructed “the wall” that excludes any possibility of transition from a complex observable phenom-enon to an abstract image or concept. It is, therefore, sensible to factor in new requirements for AI (artificial intelligence) maturity assessment when approaching the Turing test. Such AI must support all forms of communica-tion with a human being, and it should be able to comprehend abstract im-ages and specify concepts as well as participate in social practices.