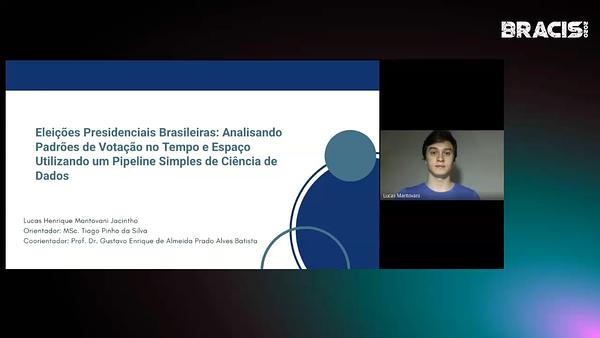 Since 1989, the first year of the democratic presidential election after a long period of a dictatorship regime, Brazil conducted eight presidential elections. This period was marked by short and long-term shifts of power and two impeachment processes. Such instability is a case of study in electoral studies, e.g., the study of the population voting behavior. Understanding patterns in the population behavior can give us insight into factors and influences that affect the quality of democratic political decisions. In light of this, our paper focuses on analyzing the Brazilian presidential election voting behavior across the years and the Brazilian territory. Following a data science pipeline, we divided the analysis process into five steps: (i) data selection; (ii) data preprocessing; (iii) identification of spatial patterns, in which we seek to understand the role of space in the election results using spatial autocorrelation techniques; (iv) identification of temporal patterns, where we investigate similar trends of votes over the years using a hierarchical clustering method; and (v) evaluation of the results. It is noteworthy that the data in this work represents the election results at the municipal level, from 1994 to 2018, of the two most relevant parties of this period: the Brazilian Social Democracy Party (PSDB) and the Workers' Party (PT). Through the results obtained, we found the existence of spatial dependence in every electoral year investigated. Moreover, despite the changes in the political-economic context over the years, neighboring cities seem to present similar voting behavior trends.